Wire Stories > Canadian Association of Physicians for the Environment  > Doctors say: Too many Canadian...   > You Are Here

Doctors say: Too many Canadian children lack protection from cosmetic pesticides used on lawns and gardens

Doctors say: Too many Canadian children lack protection from cosmetic pesticides used on lawns and gardens

TORONTO (August 30, 2016) - The Canadian Association of Physicians for the Environment (CAPE) released a new report that documents the dismal state of affairs when it comes to protecting Canadian children from cosmetic pesticides used on lawns and gardens.

The report, which compares provincial and municipal laws used to limit the cosmetic use of pesticides on lawns and gardens across Canada, found that comprehensive laws exist in only a few provinces. “While seven provinces have laws that ban the non-essential use of cosmetic pesticides, only two provinces -Ontario and Nova Scotia- provide strong protection from chemicals often referred to as cosmetic pesticides” observed Kim Perrotta, CAPE’s Executive Director.

“There is a strong body of evidence linking pesticides to cancer, developmental deficits in our children, and adverse reproductive outcomes,” said Dr. John Howard, Chair of CAPE’s Board. “As health professionals, we say the health of our future -our children- is more important than a perfect lawn or garden.”

“Only Ontario and Nova Scotia (which scored A- and B respectively) ban the use of all pesticides, except those that have been proven to be safe, for gardens, shrubs, and trees as well as lawns,” noted CAPE Board Member, Alison Scott Butler. “These two provinces use a white list approach where pesticides can only be used when manufacturers have proven that they are safe for use.”

“The white list approach has been adopted by Manitoba (which scored a B-) but it has only been applied to herbicides used on lawns,” said Dr. Warren Bell, a founding member of the CAPE Board. “It is of significant concern that Manitoba’s newly elected government is actively considering rolling back these rules.”

“Quebec’s current regulations (which scored a C) are not as protective as those in Nova Scotia and Ontario because they only apply to about 20 active ingredients and lawns. However, a proposed new pesticides strategy could vault Quebec into a leadership role if it is implemented,” stated CAPE President, Dr. Jean Zigby. “CAPE remains impressed that Quebec prohibits the use of pesticides in indoor environments frequented by children.”

“While Newfoundland and Labrador have regulations banning pesticides, they are very weak (scored D-)” said CAPE member, Dr. Ian Simpson. “Since they only apply to five active ingredients when they are applied to lawns, they do not provide very comprehensive protection.”

"Alberta has a lot of work to do (scored an E) but we are hopeful that the new government - which understands that well designed regulations can have economic, as well health and environmental benefits - will start to turn things around for the benefit of all Albertans’ health,” said CAPE member, Dr. Raquel Feroe.


Established over 20 years ago, CAPE is the only Canadian organization dedicated to speaking for health professionals on environmental issues. Over the last 11 years, CAPE has led or participated in campaigns to ban the cosmetic use pesticides in six provinces and several municipalities 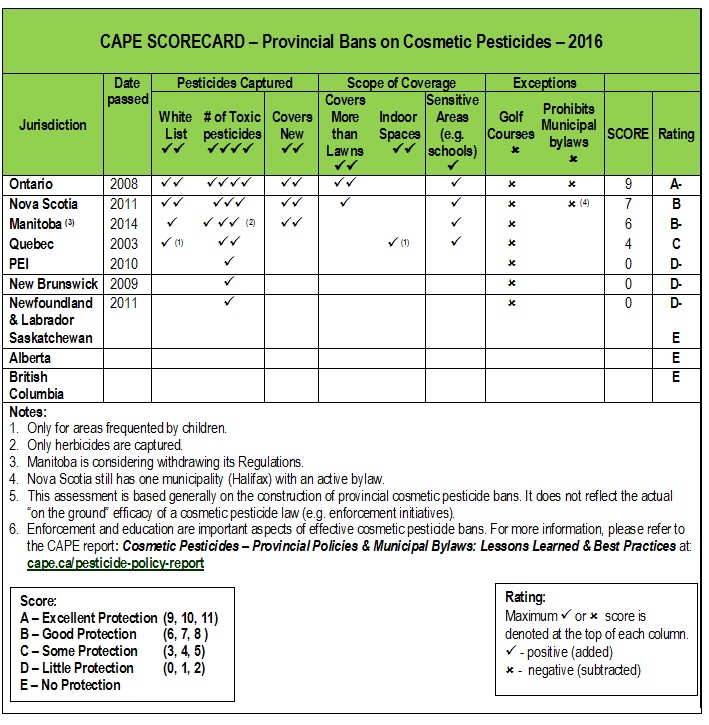