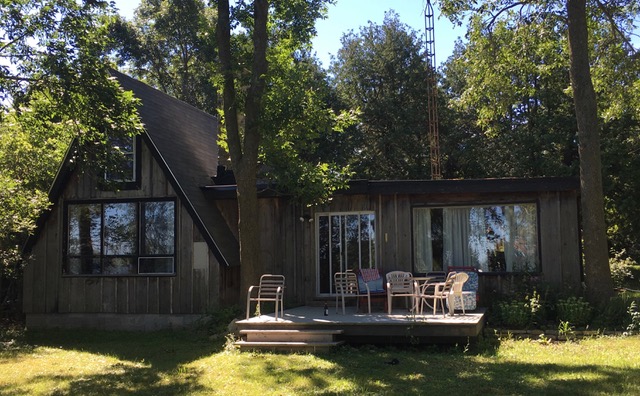 The house, built by Al and his wife Eurithe, has been restored as a retreat for Canadian writers and has welcomed more than 30 authors since 2014.

When Purdy (1918-2000) was in residence - most summers from the late 1950s to when he died - the A-frame became a stop for many of Canada’s literary figures. Halfway between Montreal and Toronto, its callers included Margaret Laurence, Michael Ondaatje, Milton Acorn and dozens of others.

In addition to a tour of the A-frame and adjacent writing shed during the open house, Purdy memorabilia will be available, including books, photos, prints and signed items. All proceeds, including donations with tax receipt, go to supporting the A-frame as a retreat for Canadian writers.

A special guest, Eurithe Purdy, will be present that weekend to share memories.

Al Purdy burst onto the literary scene in 1962 with his Poems for All the Annettes.
By 1965, he had won a Governor General’s Award for The Cariboo Horses, and again in 1986 for The Collected Poems of Al Purdy. He was awarded the Order of Canada in 1982 and the Order of Ontario in 1987. The local library, named for the poet, displays many Purdy awards and memorabilia.

''He really was a national poet in a way that you only find occasionally in the life of a culture,'' Toronto poet Dennis Lee said in a New York Times report on Purdy’s death. Purdy is buried in the Grove Cemetery in central Ameliasburgh, and his book-shaped gravestone with its reading is a popular attraction.

Parking will be available at the Al Purdy Library on Whitney Rd., a 10-minute walk from the A-frame, as well as along Whitney Rd. leading up to Gibson Rd., where the A-frame is located. There is no parking on narrow Gibson Rd.

The village will be a happening place that weekend, hosting the annual Ameliasburgh Fall Fair at the fairgrounds. Also located in the centre of the village is the Ameliasburgh Heritage Village, a large complex of buildings showing what life was like in Prince Edward County in the 1800s.

The Al Purdy A-frame Association was incorporated as a registered charity to restore the A-frame as a retreat for Canadian writers and to increase the public’s appreciation of Canadian literature. For more information, contact Raymond Brassard at brassard.raymond@gmail.com or at 613-473-2110 and 514-261-1229.